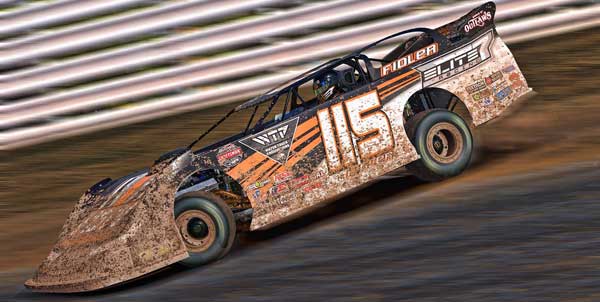 Fidler started the race from the inside of row two and quickly darted to second. After a restart with 20 to go, he decided it was time to go for the lead and a battle ensued between he and Alex Bergeron Racing

The pair traded slidejobs for the next three laps before Fidler seemingly took over the top spot convincingly. However, Bergeron stormed into turn three with a bold slidejob attempt and made contact with the left front of Fidler.

The contact sent Fidler sideways and he was then slammed hard by Elite7Racing teammate Jason George. Fidler was able to keep it going and restarted fourth after the incident. In a debatable call, VLR officials elected not to send Bergeron to the rear for the incident.

On the next green flag Bergeron would suddenly find himself facing a stiff challenge from second running Howard Weaver. Weaver was able to get a great run off turn two on the restart and pull even with Bergeron heading into turn three. Weaver dove in hard to attempt a slidejob, but his right rear clipped the left front of Bergeron.

This shot Weaver up into the outside wall and also caused the #12 of Bergeron to slow in the process. To the excitement of many of the fans watching, Bergeron's lost momentum caused the #115 of Fidler to finish him off and send the Canadian driver spinning to the inside of the 1/2 mile oval. Once again, VLR officials made a tough decision not to penalize Weaver or Fidler for the incident. This would set up an epic battle to the end in the last ten laps between the two.

Fidler and Weaver would then go on to trade slidejob after slidejob all the way to the finish with Weaver using powerful runs off the exit of turn two to pull even with Fidler, before Fidler would battle back in turn four. Fidler would go on to hold off Weaver by just a few feet at the line in a side-by-side duel to the checkers.

"I didn't like the way Alex passed me there but then later him and Howard (Weaver) got together there and I just went in there and got into Bergeron, nothing intentional," commented Fidler in victory lane, referring to the earlier incidents with Bergeron. "It was definitely fun though, and we're feeling pretty good right now after getting this win."

Jacob Leverstein snagged his first Team Friday Fast Lap Award of the season with a scorching lap of 18.520 in the waning laps of the race. Jason George was the unfortunate recipient of the Dee Hindman's Wrecker Service Hard Luck Award after late contact for the lead resulted in him coming home 20th.

Next Tuesday the stars of the Team VLR Late Model Series head to the sunshine of Florida for 50 laps of battling at the Volusia Speedway Park to mark the halfway point of the season.

We have 2200 guests and no members online