ICE_KG FIGHTS OFF HEAVY CHALLENGES TO WIN AT LAWRENCEBURG!

LAWRENCEBURG, IN (November 27, 2016) – ICE_KingGinger scored his second career VLR win at Lawrenceburg Speedway on Saturday night with his victory in the “Whiskey City 50.” Ginger first took the lead on lap 17 of the 50 lap event before a caution two laps later bunched the field up for a restart. The Wilmington, IL driver then swapped thelead with a host of drivers for the next thirty laps before coming out on top in one of the most exciting battles for the win in VLR history.

Read more: ICE_KG FIGHTS OFF CHALLENGES TO WIN AT LBURG!

KNOXVILLE, IOWA (November 20, 2016) – SKM_Smallz led all 50 laps of the Team VLR Late Model Knoxville Nationals on Sunday night - en route to the biggest win of his young sim racing career in the Kane's ITS/Mega Plumbing/Team SKM powered Rocket Chassis. However, the Pennsylvania driver had to fend off challengers all race long.

MIDDLEBOURNE, WV (November 6, 2016) – VLR_Shock comes home with one of the biggest wins of his long career as he picked up the checkered flag in the $150 to win Hillbilly 100 Sunday night at Tyler County Speedway in a thrilling finish that featured four cars breaking away from the field and battling to the very end. 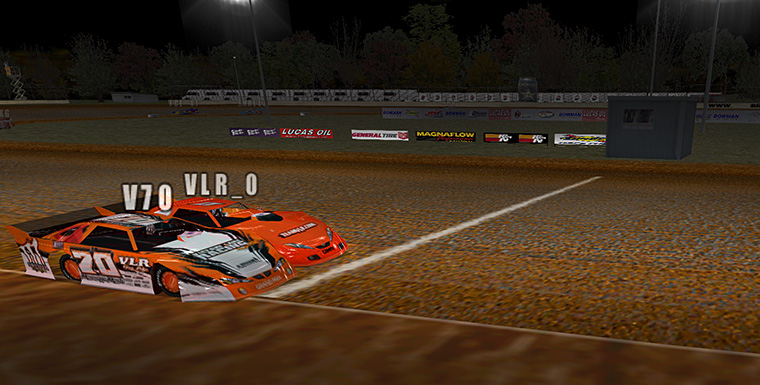 Browntown, Indiana (10/24/16) - Brownstown Speedway once again hosted the ICE Crate Late Models as they headed to the 1/4 mile track for the Jackson 50. A good car count of 11, which is good for these days, showed up to take part in the action. More drivers would've showed, but once they saw ICE_Eric41 on the track, they decided not to run.

VLR_JW spanks the field at Lawrenceburg

Lawrenceburg, IN (October 24, 2016) - The Slide Job City 50 was a very entertaining race. Smallz set fast time with a 12.01, his 2nd straight fast time. The ten lap Heat Race saw JW hold off Smallz for the victory from his 3rd starting spot. The redraw was a 4, inverting the top four, putting Shock on the pole with Rainman next to him on the front row. Racing was wild from the start with Rainman & Shock throwing slide jobs on both sides of the track from the opening lap. JW & Smallz stayed patient waiting for the top two to take each other out.

At Lap 30 JW had a 1.5 second lead over Smallz when the caution came out for Rainman & Shock who had tangled. Rainman had to retire with four flat tires. The restart with 20 to go had JW leading, Smallz 2nd, Shock 3rd, & a Hard Charging KingGinger from his 8th starting spot. KG was running for $60 if he could pull off the upset. JW was able to get away & lead the final 20 laps easily winning. Smallz, Shock, & KG threw 20 laps worth of slide jobs at each other, many times all three trying to slide each other in the same turn. KG was the cleaniest & was able to squeak out a well deserved 2nd place finish followed by Smallz & Shock.

Fascheck pulled off a few laps early with what he called "A major vibration in the rear end." We found out later he had forgotten to take out the batteries of his "massage toy" which he stated he needed for his "sore back" from carrying JW's jock strap for a majority of the night. New to the online racing was FrontDoor. He did a great job of racing clean & not interfering with the leaders.

We have 1136 guests and one member online