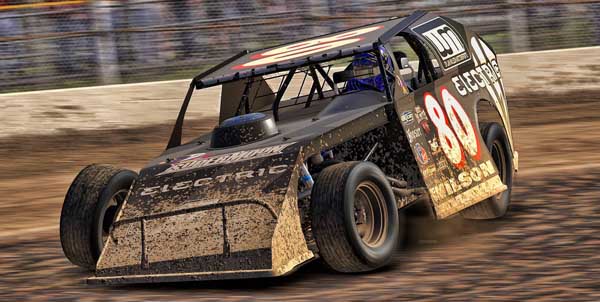 The win propelled Wilson back into the points lead after former point leader Chad Wheeler missed the feature for the first time this season. Wilson started third and quickly moved up to second place before getting the jump on then leader Shane James to take over the top spot.

Wilson would then go on to hold back attempts for the lead from 11th starting Carr, as the two had the fans on their feet with an intense back and forth battle in the closing laps which saw the lead change hands multiple times. A late caution with two laps to go gave Wilson the jump he needed to seal the deal over Carr for a two car length victory.

"We weren't very good there from the middle part of the race on. He (Carr) definitely had the best car at the end," said a relieved Wilson in victory lane. "I'd like to say how it would've played out without that caution with two to go but I was just trying to not make any mistakes and hold on to the win."

Wilson was followed closely to the line by Carr. Virgil Graham would bring home third after a powerful drive from his 17th starting position. Jeremy Capronlogged his best finish of the season with a fourth, while Quebec's Alex Bergeron Racing rounded out the top five.

Shane James was the recipient of the Mastell Brothers Trailer Service Inc. Hard Luck Award after starting on the pole and finishing 22nd after contact with Jacob Leverstein.

Next Sunday the stars of the X.CELERATED VLR UMP Modified Series presented by WR1 Sim Chassis head to Knoxville Raceway for a 40-lap showdown!

We have 1179 guests and one member online